Finally... an update on the UFO Ranch!

I know I know, it's been a month since the trip out to the ranch and I haven't bothered to post anything. In my defense.... I have to actually work a 40hr per week job to support my paranormal habit, and when you leave work for 4 days to go stay at a UFO Ranch... well things get behind. With that said, here is the gist of the trip....
We arrived Thursday evening after a very long plane ride. All I have to say is that the scenery is absolutely breath 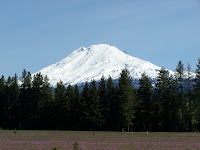 taking. I couldn't stop looking! I definitely want to go back to that part of the country to spend some time sightseeing and hiking the area... Anyway, we pitched the tent so that we had Mt Adams outside our front door and spent the evening staring at the 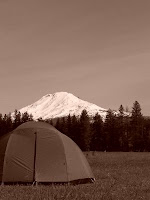 mountain (we actually spent a lot of our free time staring at the mountain, dozing, and reading on our 'front porch). We managed to help some PRS "fangirls" to set up their tent and eventually we had to hit the hay as the jet lag was finally catching up with us (I think the count at that point was 24hrs we had been awake). We crashed. Sometime around 2:00am I woke up to use the bathroom... it was freezing outside- literally. The walk to the bathhouse was long, dark and cold. As I turned a dark corner I saw the moon above the trees and at the same instant coyotes began howling. I have never been in a place with coyotes so the sounds nearly made it so the walk to the bathroom was unnecessary. On the way back to the tent, I was nearly wide awake as my internal clock thought it was 5am. The coyotes were pretty cool and the stars were amazing. I came upon some people trying to set up a tent, and I ended up putting it up for them in the freezing cold (cause I'm just little miss Danielle Boone- Killed a 'bar' when I was 3). Once back in the tent we heard some people exclaiming but we were too tired and too cold to care (did I mention our wet towels and things were actually frozen???). Of course we discovered in the morning that they had seen some pretty cool things.
Friday brough 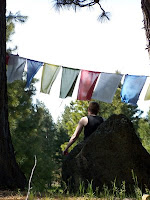 t the PRS crew to the ranch. We had a nice lunch, listened to some lectures a 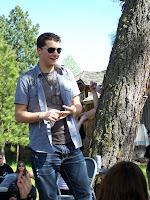 nd had a campfire chat with Michelle Belanger who is absolutely AWESOME. She is very nice, down to earth and intelligent. She made herself available to as many people as possible and seemed to enjoy the time spent around the fire each night. The event was interesting and we met some great people while we were there. There were several interesting lectures, an advanced screening of the season finale of Paranormal State (AWESOME episode!) and one really great group discussion on the meditation mound that was very intimate that I hope they do more of in the future. Thanks to Ryan Buell who was gracious enough to video tape a personal message to my teenage daughter who was not at the event. I went from being a mean mom for not taking her to the coolest mom in the world.
As for the paranormal- Apparently there were some cool things that were seen on 2 different nights. We slept through them. The first evening we were too jet lagged to move.The second occasion took place about 45 minutes after we retired for the night. I guess we're getting old. What was described to us was a triangular ship (3 lights moving in a triangular formation) that came in low overtop of the field. The other night was a triangular ship that apparently changed into a cylinder shape and changed colors. Kelly commented that a UFO could have landed outside our tent and we wouldn't have noticed... James replied that they've landed before....
In our talks with James we brought up how the wasps that were around seemed to be pretty mellow and how the wasps here on the East Coast would sting first, sting a second time, and a third then mellow out before stinging a 4th time.... James said everything on the ranch was mellow. He said the energy there seemed to have a calming effect on the animals as well as people and that the coyotes never bothered anything when they would venture on the property (James has a huge chicken coop). At first I wasn't so sure about his claim, but then I realized I was more relaxed than on any other trip I had ever gone on. As I mentioned we dozed and read and just sat taking in the view... so perhaps there is something to his calming claims.
As for UFOs- we did see some interesting things. There were points of light that moved in "wobble type patterns" unlike anything I had ever seen before. Some of these lights would grow so dim you couldn't see them anymore only to reappear and get extremely bright (this is referred to as 'powering up'). Others seemed to blink but in so specific pattern, i.e., one blink, then 3 then 2 then maybe 1, etc. I have never seen anything like this is all the times I have spent stargazing, and I have done that numerous times and in areas without much light pollution. I think there is definitely something going on out there at the ranch. I was disappointed that I did not get to see Batsquatch. But there were a lot of people there and many who were there more for the PRS hotties than the paranormal so I am guessing that might have played a part in not seeing as much as we had hoped.
All in all it was a cool experience. We were able to walk the labyrinth there and also had the pleasure of being serenaded by Michelle Belanger as we walked it (Michelle is an awesome singer!) We had some very cool conversations while sitting in the field staring at the sky and learned about some things outside the realm of the paranormal (Like life living in Israel) and had some very deep conversations with strangers (Francine from Banff if you ever read this please get in touch!!!! sorry we missed saying goodbye!) And our one crazy interaction took place after everyone was gone- Santa showed up wearing a UFO shirt, overalls, a flannel shirt over his T Shirt and a straw hat. He had a friend named Thor we thought was a small dog but turned out to be an alien head he kept outside his tent. He even had a blanket bed for Thor and spoke to him constantly. Now you know what Santa is up to in the Summer months. Oh, and his friends showed up in a beat up VW Bus (Holy Stereotype Batman!) (I am NOT making this up- I couldn't make this up... I never pictured Santa as an alien head carrying UFO fanatic)
In conclusion.... I would definitely have to say that if you get a chance go to the UFO Ranch, check it out. James is a gracious host and there is much to see and experience. 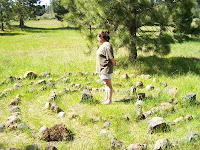 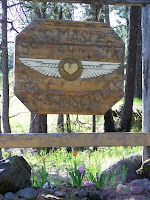 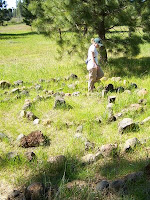 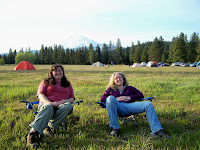 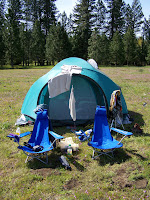