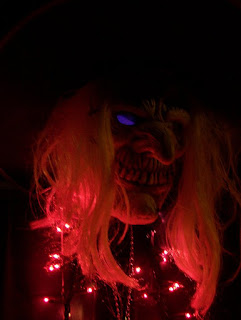 Halloween dates back to the time of the ancient Celts who celebrated their new year on November 1.  The new year signified the coming of the darker colder months of winter- a time when many fell ill and died.  The Celts believed that on the eve of their New Year (October 31), the physical world and the supernatural world were closest and allowed the spirits of the dead to roam the earth.  These ghosts were said to destroy crops and cause trouble, but it was also believed that their presence helped the Druids (Celtic priests) make predictions for the coming year. These predictions offered comfort during the hard winters, and so to commemorate the event, large bonfires were built.  The Celts often wore costumes, mainly animals skins and heads.  At the end of the celebration, the Celts would carry embers from the bonfire in a hallowed out turnip or rutabaga to their homes to light their hearth.  This "holiday" celebrated on October 31st is called Samhain (pronounced sow-in and derived from Old Irish Samuin meaning summer's end).

Through the centuries, Roman festivals were incorporated into the Celtic traditions.  One in particular, a day to honor Pomona, the goddess of fruit and trees, is possibly the origin of the tradition of bobbing for apples.  Eventually, the Catholic church created All Saint's Day on November 1st and then All Soul's Day on November 2nd in an attempt to replace the Celtic holiday with one sanctioned by the church. On All Soul's Day, people celebrated by having big bonfires, parades and dressing in costume.  The name Halloween is derived from Middle English  Alholowmesse which means All Saint's Day.  The day before was termed All-hallows Eve and eventually became Halloween.

The celebration of Halloween was limited in colonial New England because of the strict views of the Puritans.  Halloween was most popular in Maryland and the southern colonies where different European ethnic groups and Native Americans meshed their beliefs.  Public events were held to celebrate the harvest and people gathered to to share stories of the dead, tell each others' fortunes and dance and sing.  When the millions of immigrants fleeing the potato famine of Ireland began hitting the shores, the celebration of Halloween began to become more popular.  People dressed in costume and went door to door begging for food or money which later became "trick-or-treating".

In the late 1800's, people were encouraged to do away with the scarier aspect of the celebrations.  It was then that the holiday lost most of its religious and superstitious meaning.  In the 1900's, celebration moved more towards community events such as parades and parties.  By the mid 1900's, the tradition of trick-or-treating was revived as it was an inexpensive way for the community to share in the holiday (and perhaps prevent any mischief).  During this time, Halloween became more of a young person's holiday. 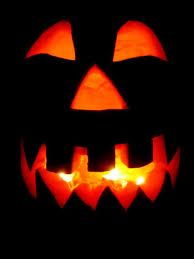 And where do Jack o' lanterns fit in?  There's an old Irish folktale about a man named Stingy Jack who tricked the devil.   Because of this he was not allowed into heaven, nor would the devil allow him into hell.  So Jack's soul was forced to wander the earth with only an ember in a hallowed out turnip to light his way.  So people began making hallowed out turnips lit with a candle to keep Jack and other evil spirits away.  Because of their size and abundance, Americans began using pumpkins. There is also a correlation between the Celts' use of the turnip to carry embers from the sacred bonfire to their homes.

So go out, have a bonfire, carve a pumpkin, remember your dreams and eat a lot of candy.
Posted by Gettysburg Ghosts at 9:51 AM No comments:

Launched in 1860 under the name Amazon, the Mary Celeste started her ill fated life.  In the 10 years before she was to become the Mary Celeste, the ship was involved in several accidents and went through several owners.  She was sent to the New York salvage auction where she was purchased for $3,000.  After extensive repairs, she was christened Mary Celeste.
The new captain Benjamin Briggs, his wife, and young daughter, along with 8 crew members departed New York on November 7, 1872 bound for Genoa, Italy.  The cargo consisted of 1700 barrels of raw American alcohol.
On December 5, 1872, the ship Dei Gratia came upon the Mary Celeste floundering on the sea.  The captain of the Dei Gratia knew Captain Briggs and was surprised to see the ship derelict as Briggs had a reputation as an excellent captain.  Men from the Dei Gratia boarded the abandoned Mary Celeste to determine what was going on.
The ship was found in good seaworthy condition.  It appeared as though the crew had left in a great hurry.  They discovered that the chronometer and sextant were missing.  There was water between the decks and the Galley was in bad shape.  The stove was knocked out of place and cooking utensils were strewn about.  There were no lifeboats aboard the ship and everything was soaked.  A rope was found hanging over the side of the ship trailing in the water.
The crew from the Dei Gratia managed to get the Mary Celeste into port.  When the cargo was unloaded, they found 9 of the barrels of alcohol empty.
What happened to the crew of the Mary Celeste?  Some feel that the cargo became unstable and that the captain decided to trail behind the ship in the lifeboat until such time that it was safe to board.  However, for some reason, the ship outdistanced the lifeboat leaving the crew helpless on the sea.
Another theory involves foul play.  However, no evidence was ever found to prove that.  Still others think that the ship was caught in the middle of a seaquake.  And still others claim the crew was eaten by sharks during a swim.
Whatever the reason, the story of the Mary Celeste stills fascinates people.  Something about the image of a ship sailing alone, the crew and captain missing..... without a trace.
Posted by Gettysburg Ghosts at 9:35 AM 1 comment: