Today we celebrate Halloween or Samhain (Samhain comes from Gaelic meaning Summer's End) Back in the time of the Celts, the New Year began on November 1st.  On the eve of the New Year (October 31st) it was believed that the physical world and the spirit world were closest allowing the spirits of the dead to roam the earth.  Because the veil between the worlds was thin, it was a good night  for divination.  Predicting the future was a way to get through the cold winter months and have hope for the spring.  One thing that many people (particularly young women) tried to predict was if, when or who they would marry.
You can try some of these divination tools tonight if you're looking for information on your future love life:

Bobbing For Apples
Yes, this seemingly innocent game whereupon you nearly drown yourself to bite into and pull out an apple from a bucket of water was originally a way to predict the future.  A bushel of apples was dumped into a large tub of water and "players" would attempt to pull an apple out with their teeth.  The first to do this would be the first to marry out of the group.  If the apple was crisp and crunchy it was predicted to be a happy marriage and if it was rotten it would be a marriage of misery.

Bite The Apple
In Bite the Apple, a coin is inserted into the apple and the apple then hung from a string.  Players held their hands behind their backs and attempted to bite the apple.  The first to do so won the apple, the coin and the prediction of a prosperous life.  I actually remember playing this game as a child.  I'm pretty sure I remember cheating and using my hands.

Peel the Apple
This one isn't really a game.  Girls would peel an apple then throw the peel over their shoulder onto the floor or into a tub of water.  The letter formed by the apple peel was the first initial of the man they would marry.  I tried this once in my youth, but the dog always stole the peel before I could see the initial. I was once told by someone that if you recite the ABC's while twisting the stem on an apple, the letter you're on when the stem comes loose is the initial of the man you'll marry.

This one is slightly creepy.  A girl sits in a dark room in front of a mirror with only a candle as light and peels an apple while staring into a mirror. If she's to marry, the face of her future husband will appear.  But if she's destined to die before marriage, a skull will appear. Many teens play the "Bloody Mary" game where it's said that if you look into a mirror in a dark room and say Bloody Mary 3 times her ghost will appear in the mirror.  In the Maryland area,  there was the legend of Black Aggie.  If you said the name Black Aggie in the mirror three times in the dark at midnight, she was said to appear behind you and either stab you, cause you to lose your mind or transport you to hell – or all three at the same time.  I imagine that these games have some basis in the original game played with apples during Victorian times.

Dumb Supper
The celebration of Samhain is also a time to honor passed loved ones.  One interesting way to do this is by

hosting a Dumb Supper.  (Dumb in this sense refers to being silent.)    There are several different ways to host one, but here are the basics.  The menu should consist of foods that remind you of those who have passed (their favorite foods or a dish they enjoyed making, etc) or feature foods like apples, fall squash, fall greens, etc.  A place setting is put out at the head of the table for the departed.  Typically, the food is served backwards- that is you start with dessert, then entree, then appetizer.  The place settings are also supposed to be backwards.  Food is served to all the place settings, including ones set for ancestors.  The entire meal is silent.  No talking.  No communicating of any kind.  The only noise is music that is played in the memory of those who have passed.  After the dinner, guests share memories and stories about those who have passed on.  Guests are encouraged to bring photos of those who have departed.  Also, each guest is encouraged to stop at the chair at the head of the table before being seated.  In some suppers, when guests are finished dining, they each one by one take a note they've written for their loved one to the head of the table where they read the note silently then burn it.  They're really are many ways in which you can conduct a Dumb Supper- as long as you conduct it in silence.

Posted by Gettysburg Ghosts at 10:40 AM No comments: 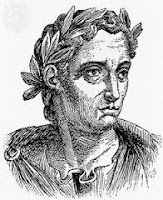 Ever wonder what the first recorded ghost story was?
It happened back in the 1st century AD- Pliny the Younger wrote about a spirit in his letters.

There was a house in Athens with an unsavory reputation.  It was reported that each night, the sounds of weapons and chains could be heard first from far away and then gradually getting closer.  Eventually the ghost of an emaciated, dirty old man with a scraggly beard and hair would appear with chains on his hands and feet.

The house fell empty because of resident being afraid of this ghost.  It was eventually sold to a philosopher named Athenodorus who purchased it despite it's history.  One evening, as he was up writing, he heard the sounds of chains growing closer and closer.  When they sounded as though they were in the room with him, he looked up and saw the spirit of the old man.  The ghost actually beckoned to Athenodorus, but he ignored the ghost and continued writing.  Then he heard the rattling chains above his head, so Athenodorus took his torch and followed the ghost to an open area.  The ghost disappeared.  The philosopher marked the area where he last saw the ghost and went to bed.

The next day, the area where the ghost disappeared was dug up and in the hole they found a skeleton with chains on its arms and legs.  The skeleton was given a proper burial and the ghost was never seen or heard from again.

Posted by Gettysburg Ghosts at 9:56 AM No comments: