Call them fireflies, call them lightning bugs, whatever you call them they are certainly one of the the bright spots of summer.  Most people can remember spending a lazy summer evening catching these bioluminescent bugs and putting them in jars.  Summer nights wouldn't be the same without them.
Gettysburg wouldn't be the same without them either.  Each summer brings thousands of lightning bugs to the battlefield.  While this might not seem that strange or blog-worthy, the sheer number of lightning bugs in certain areas of the battlefield certainly is something to take note of.  A few years ago while investigating an area near Spangler's Spring and Rock Creek, myself and several other investigators came upon trees filled with fireflies.  There were thousands.  So many that it looked as though someone had strung hundreds of strands of white fairy lights in the trees.  I have never witnessed anything else like it before or since.  Fireflies are usually seen in fields flying around at night, not perched in the trees. 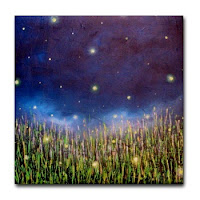 That isn't the only strange firefly story from the Gettysburg Battlefield.  About a year ago, I had someone contact me about an unusual lightning bug encounter that occured at The Angle.  A family member of hers shared that in late fall (I want to say she said November) he saw what he was certain were fireflies in the field.  Only fireflies are not out in the fall and certainly not as late as November.  Recently while out jogging the road that runs from the PA memorial to The Angle, I noticed hundreds of fireflies along the side of the road.  It was such an unusual sight that I stopped my run to watch and look at all the bugs.  It was amazing.

So what can I offer other than a couple of oddball bug stories that occured on a haunted battlefield?  In the Mayan culture, the firefly or kuhkay was associated with the practice of smoking cigars.  Fireflies were also associated with stars, comets and several Mayan deities.  But the most interesting and important association comes from the Japanese culture.


In Japan, fireflies are thought to be the souls of soldiers who have died in battle. 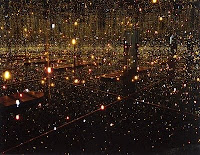 What could solar weather possibly have to do with the paranormal you ask?
What is solar weather, anyway, right?

Simply put (and I stress the simply part), the solar weather that I am referring to is the geomagnetic field and solar flares.  The geomagnetic field is the magnetic field observed in and around the earth. Flares are sudden eruptions of energy on the solar disk (the sun) lasting minutes to hours from which radiation and particles are emitted.  These particles and radiation are shot out towards the earth. Basically, an increase in activity concerning the geomagnetic field or solar flares means an increase in energy in the atmosphere.
How does this affect spirits? Spirits use energy to materialize, and they typically pull this energy from the basic sources around them, i.e., heat, batteries, power lines, etc. But during heightened solar activity, the energy level is increased, therefore, increasing the amount of usable energy for spirits. The increase in energy allows spirits to manifest easier and more often, which in turn increases the possibility of paranormal activity.

New evidence discovered by NASA scientists predicts that a huge solar storm could be headed our way sometime in May of 2012.  NASA believes that the solar flares that will be created will have enough power to significantly affect our way of life here on earth.  What I mean is that our electrical grids will be wiped out, Internet, cell phone service, land line phone service, etc will be rendered useless.  The extent of damage these flares could cause would make the cost of Katrina (in the billion dollar range) look like a mere drop in the bucket.
Still, what does this have to do with ghosts and the paranormal?  Think about it.  Imagine the amount of electricity and radiation that would be in the earth's atmosphere in order to create such havoc.  If ghosts can use energy from an AAA Energizer battery to manifest, what could happen if they had a nearly limitless amount of energy to pull right out of the atmosphere.
Is there a reason why the world has begun this new spiritual revolution?  Are all these paranormal TV shows and groups popping up for a reason?  Will we be able to finally speak with passed loved ones via our HAM radios?

Posted by Gettysburg Ghosts at 1:19 PM No comments: