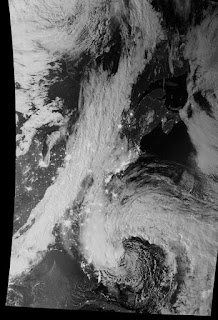 Who doesn't like a good storm?  And what paranormal enthusiast wouldn't find some humor in a storm dubbed the "Frankenstorm" that is hitting close to Halloween and on a full moon?  While I get excited at the prospect of losing power for a bit and relying on candlelight to read ghost stories by, this storm isn't one people should take lightly.  So for all those in the potential path of Hurricane Sandy (the East Coast) or in areas that will undoubtedly receive the effects of Sandy, please be prepared!  Here are some suggestions:

Power outages will be widespread and could last for days! Keep in mind, those with a well will also lose water along with electricity.
We hope for the best but prepare for the worst.  Stay safe out there and hopefully we'll be back to blogging next week
Posted by Gettysburg Ghosts at 12:44 PM No comments: 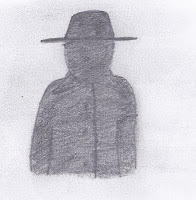 About 12 years ago, I had an encounter with an apparition that left me terrified.  More terrified than I had ever been before- and I've had my share of creepy encounters as a paranormal investigator.  It was a Saturday night, and I had been out on the Gettysburg Battlefield doing an investigation.  That night, I opted to stay at my parents' house rather than go home to my place.  I went to bed in my old room and had no issue falling asleep.  Some time late in the night, I suddenly woke from a sound sleep. I laid in bed for a moment listening, wondering if there was a noise that could have interrupted my sleep.  It was dark in the room.  There were no curtains on the window and no moon, or at least not a large enough moon to create enough light.  I happened to glance down at the foot of my bed, and there I saw a dark figure standing at the end of the bed.

The most notable feature was the wide brimmed hat that it wore.  It seemed to be wearing a long trench coat like garment or some type of long sleeved large collared jacket.  The bed was a 4 poster bed and the posts were painted an off white.  I distinctly remember seeing the man's hand curled around the post as if holding on to it.  The moment I saw the figure I was overcome with fear and panic.  I'm not talking about that "oh crap there's a ghost at the foot of my bed" fear, I'm talking about fear that comes from knowing that what's there isn't good.  I squeezed my eyes shut and began reciting The Lord's Prayer over and over until the sun started to peek over the horizon.  I finally managed to get up and started getting ready for work.  I couldn't find my glasses.  I'm a creature of habit, sometimes with a few slight OCD tendencies, so believe me when I say that I place my glasses in the exact same spot every night when I go to bed. Even now, 12 years later, I place them in the same spot- directly in front of my alarm clock. Yet that morning they were nowhere to be found.  Not under the bed, not on the floor, not anywhere near the clock.  I ended up being 15 minutes late for work and having to leave without my glasses (which I need to drive).

Luckily for me, my supervisor at the time was a fellow ghost enthusiast and didn't care about me being late because it came with a story.  I went through what happened and then got to work.  A few moments later, I heard my boss call out from the back room, " I thought you couldn't find your glasses."  "I didn't find them," I said.  "But they're sitting on top of your clothes in the bag!" I went to look and sure enough, my glasses were sitting right on top of my clothes. I threw my clothes in the bag myself and I know that there was no way that my glasses were in there, let alone set neatly on top of the pile.

It was several years later that I came across some information regarding what was called "the hat man".  I was shocked as I read about someone else's encounter with the very same entity I had seen.  I was intrigued and researched further and found hundreds of people around the globe have had eerily similar interactions with this "hat man".

The following are the most described details of a hat man encounter:
As with shadow people in general, it's hard to say what the Hat Man is, what he wants or what his agenda is.  With the majority of people having a sense of fear or dread, it doesn't seem as though it is something "good" or something with "good intentions".  Some people feel that he comes to monitor things.  There have even been some who believe that he monitors people with psychic abilities or those who investigate the paranormal.  Whatever his intents, I certainly hope he never makes another appearance in my room again.

Have you had an encounter with the Hat Man or with another form of shadow person? I'd like to know about it.  Email your story to investigations@gettysburgghosts.net
Posted by Gettysburg Ghosts at 9:34 AM 1 comment:

You're watching TV and suddenly catch something out of the corner of your eye.  You turn your head to look and see a shadowy figure dart quickly around a corner or through a wall.  Or you wake up in the middle of the night and see a figure darker than night staring at you and you're gripped with fear.  These are just a couple of scenarios people report of visits from "shadow people".

What are shadow people? By definition, they are supernatural humanoid figures that are described as being blacker than night with quick jerky movements and the ability to quickly disappear through walls, around corners or into mirrors.  Some are described as having red eyes though many have no facial features at all.  Some believe that shadow people are simply ghosts, however, there is a distinct difference between the two.  Apparitions that are seen tend to be describe as wispy forms and many have describable details such as facial features and clothing.  Shadow people have no discernible features or details.

For years, most encounters with shadow people involved seeing them out the the corner of the eye.  The encounters were brief with the entities disappearing quickly- making some question what they had actually seen.  Now encounters are starting to include more direct sightings with people viewing them full on in front of them and for longer periods of time.  In 2012, sightings of shadow people was one of the most reported paranormal phenomena.

I've had my own run-ins with these entities.  Approximately 14 years ago, I was regularly seeing figures out of the corner of my eye looking around corners at me.  As I would notice movement in my peripheral vision, I would quickly turn my head and see a dark form pull back behind the wall. After mentioning the sightings to my mother, I learned that my father was witnessing the same thing in the same areas of the house that I was.

October 2010 I had another encounter with a shadow figure, this one more frightening.  I was taking my daughter and a couple of her friends out on the Gettysburg Battlefield for some ghost hunting.  We went to the tower at Culp's Hill.  While we were sitting on the steps of the tower platform, we heard footsteps on the tower.  At the time, there were no other cars or people in the area.  I climbed up 2 flights of steps on the tower and sat quietly listening.  There was no other noise heard.  At this point, the girls were feeling uncomfortable as was I.  We opted to head out.  As we made our way across the road to our parked vehicle, I felt someone watching us and turned to look behind us.  There I saw a shadow figure standing on the platform of the tower.  We kept walking to the van, and I turned and looked again and saw the figure had moved closer. I unlocked the van doors, but as everyone went to open the doors, they locked again.  It took 3 tries before we were able to open the doors and get into the car.  The encounter left me rattled.

So what are these things? There are many theories about what they might be.  Some think they could be astral bodies or spiritual bodies of people  having out of body experiences.  Others think they could be time travelers, aliens or inter-dimensional beings.  Some argue that they're dark beings or demons and still others claim that they are guardian angels.  In my own experiences, I felt apprehension and fear, but I'm not quick to say they're evil.  I simply do not know.

Have you had your own experiences with shadow people? I'm compiling stories of this phenomena and would welcome you to email me your stories at investigations@gettysburgghosts.net

Stay tuned for information regarding another shadow figure known as "The Hat Man"
Posted by Gettysburg Ghosts at 9:55 AM No comments: