Weather and the Paranormal

Weather comes in two varieties when discussing the paranormal: meteorological and solar.  Meteorological refers to the weather in the Earth's atmosphere.  Weather conditions can affect paranormal investigations in many ways.  The obvious way is that certain conditions can create false positive photos- especially when investigating outdoors.  Orb photos have become extremely controversial among leading paranormal investigators.  This is in part to taking photos in less than ideal conditions.  Both snow and rain can be photographed to mimic the orb phenomena.  Pollen, like dust, can also produce orbs in photos.  While not really a weather event, pollen counts are often recorded on the popular weather.com website.

Wind speed is also an important factor during investigations.  Higher wind speeds can create issues with recordings and also blow small particles around.  They can create drafts in houses and produce strange and eerie noises.  I recently witnessed an " investigator" on the battlefield who was convinced that the spirits were moving plastic caution tape on command.  By simply licking my finger and holding it in the air, I was able to determine that there was a slight breeze.  The breeze was blowing directly against the area of caution tape with the widest area exposed to the wind.  This made the tape move each time there was even a slight breeze.  The other areas of tape had the thin end exposed which allowed the breeze to go by without any movement at all.

Humidity levels should also be considered during an investigation.  High humidity can be photographed to appear like orbs or even mist.  It can also cause some issues indoors by swelling wood.  A possible implication could be a door that doesn't close properly- if it were to swing open it could be perceived as paranormal when in fact it isn't.  Humidity levels could also have a beneficial aspect for an investigation.  Because of water's ability to conduct electricity, a higher percentage of moisture in the air might give spirits more energy from which to draw from.

I've also found that electrical/lightning storms can increase the amount of activity in an area.  Again, the electricity of the storm offers ghosts another source of energy to pull from making it easier to manifest or interact.  On one investigation at Spangler's Spring on the Gettysburg Battlefield, I witnessed 4 shadow figures move to "block" the roadway.  There was little activity most of the night until a storm started moving in.  It was when the lightning came closer that I began seeing the figures.

Also be aware of temperatures and how they can affect equipment.  Going from a warm house to cold temperature outside or warm temperature outside into an air conditioned house can cause fogging and condensation on lenses.  Battery power also drains quicker in colder temperatures.  When conducting an outdoor investigation in cooler temps, be aware of whether or not your breath is condensing into a fog.  Many people take photos of their breath in cold weather an believe they have captured something paranormal.

The other type of weather to consider during an investigation is solar weather.  Solar weather refers to weather involving the sun in space namely solar flares and geomagnetic fields.  The geomagnetic field is the magnetic field observed in and around the earth. Flares are sudden eruptions of energy on the solar disk lasting minutes to hours from which radiation and particles are emitted. Basically, an increase in activity concerning the geomagnetic field or solar flares means an increase in energy in the atmosphere.
How does this affect spirits? Spirits use energy to materialize, and they typically pull this energy from the basic sources around them, i.e., heat, batteries, power lines, etc. But during heightened solar activity, the energy level is increased, therefore, increasing the amount of usable energy for spirits. The increase in energy allows spirits to manifest easier and more often, which in turn increases the possibility of paranormal activity.

The phases of the moon also dictate paranormal activity. Everyone knows that a full moon brings out the crazies and werewolves. It also brings out the ghosts. Though many have heightened activity during full moon, I personally have seen an increase during new moon. The gravitational pull of the moon apparently moves more than tides, it also attracts spirits.

So the next time you go out for an investigation, make sure you record weather conditions!


From n3kl.org
Posted by Gettysburg Ghosts at 10:15 AM No comments:

For over 200 years, a strange creature has been sighted in the Chesapeake Bay. This creature, affectionately known as Chessie, is said to be a dark snake-like animal, approximately 30 feet long, and capable of swimming up to 10 MPH. Chessie is known to be playful and is not feared by those who work and live on the Bay.
So what is Chessie? Some believe it is a prehistoric creature, however, this is unlikely. If it were a prehistoric reptilian creature, the Bay would not be an ideal habitat. The Chesapeake is very shallow and cold, in fact, in winter it can freeze over in places. A cold blooded prehistoric animal would not be able to survive.
Others have leaned towards the idea that Chessie isn't an unknown animal at all. In 1994, a manatee was captured and tagged in the Chesapeake Bay. It was taken back to its native Florida home and released. The following year the manatee swam into the Bay again. In fact, it swam clear up to Rhode Island before turning and heading south again. Year after year this same manatee makes his journey. Could it be Chessie the monster and Chessie the manatee (as it has been named) are one in the same? I find that scenario as unlikely as the prehistoric animal theory.

In 1982, someone by the name of Frew videotaped the creature. Mr. Frew and his wife were looking out at the bay when they noticed a large snake-like creature. The Frews grabbed their camera and started recording. That video tape was later analyzed by people at the Smithsonian. It was determined that the creature taped was a living animal, however, the type of animal could not be identified.


Chessie is still seen in the Bay. Most sightings occur in May through September most likely because that is when the Bay is overrun with boaters and swimmers. Chessie has been sighted most often at Love Point at Kent Island, the mouth of the Potomac, and the eastern Bay.

In 2008, while visiting the memorial for the U.S.S. Tulip in southern Maryland, we happened to spy a couple of strange aquatic "creatures" in the Potomac. What we saw was roughly 6-8 feet long and swam around for a few minutes before swimming off. It appeared that whatever the creatures were, they were in the middle of fishing/feeding.  One photo shows what appears to be knob-like objects along the spine.  This is similar to a fish known as an Atlantic Sturgeon. 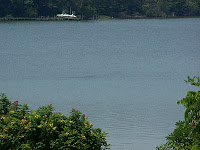 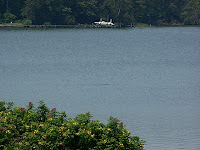 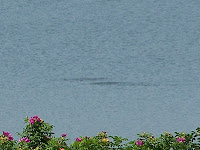 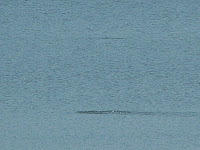 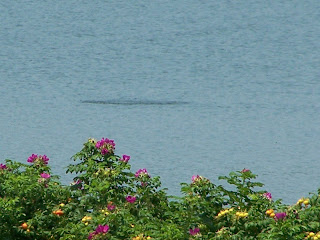 Was this Chessie? Or was this simply a rare sighting of an Atlantic Sturgeon?
Either way it's a spectacular find.
Posted by Gettysburg Ghosts at 12:47 PM No comments: