The plot of the movie The Conjuring deals with events that took place in Rhode Island in the early 1970's in the home of Carolyn and Roger Perron. Mr. and Mrs. Perron along with their 5 daughters were terrorized to the point that Ed and Lorraine Warren (of Amityville Horror fame) were called in.

The beginning portion of the movie outlines those hauntings and the subsequent investigation by the Warrens.  This was the most believable and enjoyable part of the movie.  It was full of suspense, the typical shots where everything is quiet and you just know something will be popping out or showing up in a mirror without notice. I'd have to say the most chilling moment in the movie was a scene where Christine, one of the daughters, has her foot pulled by an unseen entity.  She wakes her sister Nancy who she shares the room with and tells Nancy she sees a man standing by the door.  Nancy goes to the door to investigate and sees nothing though Christine keeps saying there's a man there.  The door eventually slams shut. It's scenes like this that really freak a person out.  You've either experienced something similar or have heard stories.  Because the scene is so simple and you don't actually see the man, your imagination fills in the gaps.  Believe me, my imagination scares me more than anything Hollywood does to spell things out.  And therein lies my big complaint about this movie:  Hollywood.

Apparently, demons sell movie tickets and bring in TV ratings because that seems to be what all the paranormal based shows and movies are about now.  It's old.  I've seen the levitating people, I've seen the people flying around a room, taking on demonic appearances, Holy Water being sprayed and crucifixes.  I've heard the Rite of Exorcism so many times on TV I think I can recite it myself without it in front of me.  It's like the boy who cried wolf.  Hearing how every haunting is demonic desensitizes you to it.  "Oh, that guy got possessed? Yeah, been there done that AND saw the reruns."  So while the first half of the movie entertained and kept me in suspense, the last bits made me laugh.  In fact, the 3 of us who went together who all investigate the paranormal, laughed.  And that's a shame, because the events that happened in the movie at the end could have possibly actually happened to that family and Hollywood cheapened it.

So to sum it up, the first half was great- lots of scares, suspense and a peek into old investigation techniques.  The last half- way too exaggerated leaning towards unbelievable.  So Hollywood, if you're listening and you're thinking of doing another Warren investigation turned movie, stick with the truth and don't over dramatize.  Trust me when I say the actual events are scary all on their own- scarier than anything you make up because they happened.

Overall, if you enjoy scarey movies, I'd recommend seeing this one in theaters.  As a paranormal investigator, I'd give it 7 out of 10 stars.  My daughter (who ended up sleeping in my room after seeing it) and her friend (who cried) would probably say as a regular Joe, it's more like 8 out of 10, maybe 9.  So go see it and let me know what you think.
Posted by Gettysburg Ghosts at 10:50 AM 1 comment: 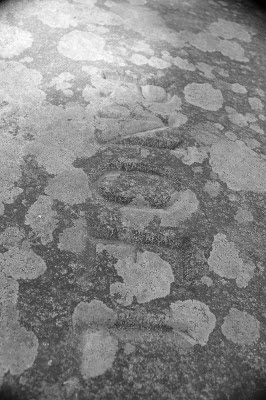 Above the rocks of Devil's Den, there's a large boulder that bears the mark P. NOEL.
There is a story that Peggy Noel, who was decapitated in a carriage accident along Marsh Creek,
came here in ghost form and carved the name with her finger of fire.
I've also heard the more believable story that it was chiseled by a surveyor.
Either way, it's said that if you trace the name with your finger,
bad luck will follow.
A few years ago,
I was with a Boy Scout Troop and told them the story of Peggy,
her finger of fire and
the doom that would come
should they dare to trace the name.
Of course, several of them traced the name.
On the way back to the cars,
one boy stepped in a ditch and had to be taken to the hospital
with what was thought to be a broken leg.
Immediately following, there were 5 boys sobbing in a van
certain they had brought about their friend's accident by tracing the name.

Do I think doom will befall you if you trace it?
No.
Will I trace the name myself?
Why take the chance?

(The boy didn't break his leg, just did some ligament damage and it's been a great story to tell)
Posted by Gettysburg Ghosts at 5:21 PM 4 comments: