The Lost Silver Mine of Silver Run 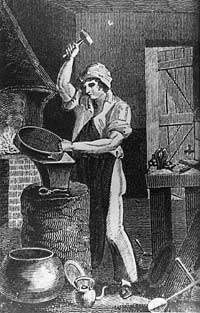 In the County of Carroll in the State of Maryland sits a small town called Silver Run.  In the late 1700's, a master silversmith by the name of Ahrwud lived in the area with his daughter Frieda.  They lived apart from the other settlers of the area, and Ahrwud was known to be a friend to the local Native Americans.  People wondered about Ahrwud's friendship with the Indians, his beautiful daughter who was know to run around the woods with her hair in braids and the fact that Arwud was able to sell his wares at an unusually low price.  It was almost as if he had access to an unlimited supply of silver.

Each night, Ahrwud would lock Frieda in her room.  She would hear her German father speaking the language of the local Indians and then she would hear her father close and lock the shop door.  Frieda was angered at being treated as a child when she was 17 years old.  So one night she waited up for her father to return.  When she heard Ahrwud come into the house, she went to him begging him to tell her where he had been all night.  Seeing his daughter's tired and worried face he agreed to take her with him the following night if she swore never to reveal his secret.

The night came and Ahrwud did as he promised.  He blindfolded his daughter and started out into the night leading his daughter in one hand and holding a lantern in the other.  The trail was rough and had them going up hill and down through briars and brush.  At a stream, Frieda was allowed a drink and the blindfold taken off momentarily.  She took the opportunity to get a bearing on her surroundings before being blindfolded again and continuing on their way.  They eventually came to a cave.  Ahrwud led Frieda inside and removed her blindfold to reveal a silver mine with silver coins and bullion lying about and a thick shimmering vein of silver striking through the rock.  Ahrwud explained to his daughter that the mine belonged to the Indians who shared its location with him because of their friendship.  Ahrwud warned his daughter that should the secret of the mine ever leave their family, they would pay a penalty with their lives within 3 days.  The mine would vanish and their souls would walk the earth until 3 lives were sacrificed to set them free.  Only then would the local settlers learn of the mine's location.  Frieda swore to keep the secret. 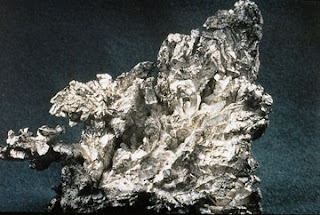 Ahrwud began melting down the silver and making coins.  An hour before dawn, he blindfolded his daughter and they made the trip back to their home.  Frieda, though blindfolded, was able to mark the trail by breaking branches.  Once home, Ahrwud went to sleep, but Frieda was too excited and immediately went to tell her friend of the treasures she had seen.  After some coaxing, Frieda's friend convinced her to show her the mine.  Using the broken branches as markers, the girls made their way to the cave.  They loaded up with as much silver as they could carry and made their way home.  Unbeknownst to them, they were being watched.

The first day passed without incident as did the second, but on the third day, several Indians showed up at Ahrwud's home.  Telling Ahrwud of his daughter's betrayal, they took both father and daughter out of the house and to the mine.  There Frieda was beheaded and burned Ahrwud's eyes from his head with a rod of hot silver.  It's said that people still see the shadowy form of Ahrwud in his wide brimmed hat carrying his lantern making the trek back and forth to the mine and his daughter by his side.

The location of the mine is thought to be in the vicinity of Rattlesnake Hill just east of Union Mills.  Just recently, my parents (who reside in Silver Run) had a sinkhole open up in their pasture.  It made me immediately think of the mine.  Sadly, there was no sign of silver. 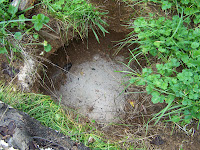 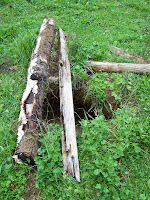 Posted by Gettysburg Ghosts at 7:17 PM No comments: