On April 14, 1912, the huge "unsinkable" ship the Titanic was steaming across the Atlantic towards New York.  This was the Titanic's maiden voyage, and her captain was encouraged to break the record for speed while making the voyage. As most people know, after striking an iceberg, the unsinkable ship went down in only a matter of hours.  Out of the 2,201 passengers, only 711 were saved.   Since then, there have been many books and movies about the Titanic. 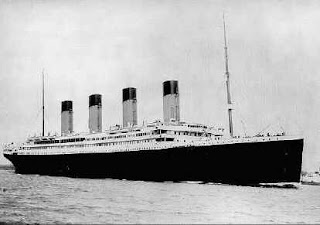 There was one fictional story written by a merchant seaman by the name of Morgan Robertson.  Robertson's book was about an unsinkable passenger liner that sank while carrying the elite people of the time.  The ship in Robertson's story was called the Titan and the book was titled The Wreck of the Titan.  Even though the book is fictitious, the events in the story parallel the events of the Titanic.  Both ships were built to be unsinkable.  Both ships sank after striking an iceberg.  Both ships were on their maiden voyage.  The most well to do famous people were on the Titan and Titanic.  Only one third of the passengers on each ship survived.  Both ships had an inadequate number of lifeboats.  Both ships were encouraged to break speed records during their voyage.
Robertson's book The Wreck of the Titan was never published.  Each time it was rejected by editor's, they told him the same thing.  The story was unbelievable.  Surely the events he wrote of could not possibly happen to an unsinkable ship. 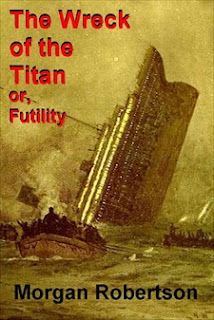 The book The Wreck of the Titan was written in 1898,

fourteen years before the Titanic hit an iceberg and settled on the bottom of the northern Atlantic.
Posted by Gettysburg Ghosts at 9:21 PM No comments: